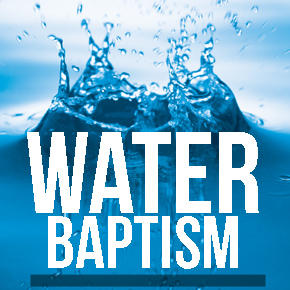 Because you want to follow Christ’s example. “At that time Jesus came from Nazareth and was baptized by John in the river.” Mark 1:9 Because Christ commanded it. “Jesus said, `Go then, to all people everywhere and make them my disciples, baptize them in the name of the Father, the Son, and the Holy Spirit, and then teach them to obey everything I have commanded you..’” Matthew 28:19-20 Because it shows you are a believer. ”…many of the Corinthians who heard him believed and were baptized.” Acts 18:8 Because obeying Christ’s command shows you know Him. “We know that we have come to know Him, if we obey His commands.” 1 John 2:3

The MEANING of Baptism:

It is a symbol of Christ’s burial and resurrection. ”Christ died for our sins…he was buried… and he rose again.” 1 Corinthians. 15:3,4“For when you were baptized, you were buried with Christ, and in baptism you were also raised with Christ.” Colossians 2:12 It is a symbol of your new life as a Christian. “When someone becomes a Christian he becomes a brand new person inside. The old life has passed away and a new life has begun!” 2 Corinthians 5:17“By our baptism then we were buried with Him and shared His death, in order that just as Christ was raised from the dead also we might live a new life!” Romans 6:4 Baptism does not make you a believer, it shows that you already are one! Baptism does not “save” you, only your faith in Christ does that. Baptism is like a wedding ring – it’s the outward symbol of the commitment you made in your heart. “For it is by grace you have been saved, through faith. it is the gift of God not by works, so that no one can boast.” Ephesians 2:8,9

HOW should we be baptized:

Like Jesus was baptized by being immersed in water. “As soon as Jesus was baptized, He went up out of the water.” Matthew 3:16 Every baptism in the Bible was by immersion under water. “…then both Philip and the eunuch went down into the water and Philip baptized him. When they came up out of the water…” Acts 8:38,39 The word “Baptize” literally means “to dip under water”. The Greek word “baptizo” means “to immerse or dip under water.” It is the best way to picture a burial and resurrection. Martin Luther… “I would have those who are to be baptized to be entirely immersed, as the work imports and the mystery signifies.” John Calvin… “The word ´baptize´ signifies to immerse. It is certain that immersion was the practice of the ancient church.” John Wesley… “Buried with Him, alludes to baptizing by immersion according to the custom of the first church.”

WHO should be baptized:

Every person who has made the decision to believe in Christ. ”Those who believed and accepted His message were baptized.” Acts 2:41 “But when they believed Philip as he preached the Good News… And the name of Jesus Christ, they were baptized, both men and women.” Acts 8:12 “Simon himself believed and was baptized…” Acts 8:13 The one requirement for baptism is belief in Christ! We do not baptize children until they are old enough to understand and believe. Some churches practice a “baptism of confirmation” for children. This ceremony is intended to be a covenant between the parents and God on the behalf of the child. The parents promise to raise their child in the faith until the child is old enough to make his own personal confession of Christ. This custom began about 300 years after the Bible was completed. This is different from the baptism talked about in the Bible which was only for those old enough to believe. The purpose is to publicly confess your personal commitment to Christ

WHEN should I be baptized:

As soon as you have believed! You shouldn’t delay. ”Those who believed…were baptized…that day!” Acts 2:41 “Then Philip began with the Scripture and told him the Good News about Jesus. As they traveled along the road, they came to some water, and the eunuch said, Look here is water! Why shouldn’t I be baptized right now? Philip said, If you believe with all your heart, you may. The official answered, I believe that Jesus Christ is the Son of God. Then both Philip and the eunuch went down into the water and Philip baptized him.” Acts 8:36-39 (paraphrase) There is no reason to delay. As soon as a person decides to believe in Christ, they can and should be baptized.